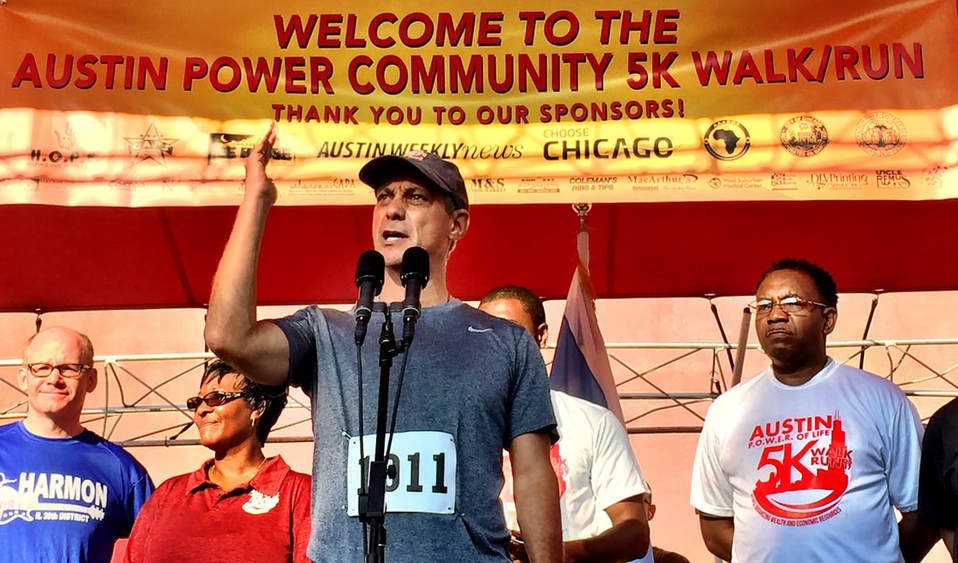 The 3rd Annual Austin Power of Life Saturday morning 5k run brought thousands to Chicago Ave + Mayfield.  It wasn’t just about the race, but to bring attention to the economic renewal underway on the westside of Chicago.

The pre-race celebration landed on the first day of fall with a righteous 81-degree forecast.  Austin’s two Aldermanic council members Emma Mitts, Christopher Taliaferro along with colleagues and friends took the moment to spotlight massive projects underway in the area. 2018 will see the city invest $130M in and around the neighborhood. A new Public Safety Training Academy for police and fire departments on Chicago Ave. Also, the next phase of Chicago’s Smart Lighting Project will replace all street lamps with LED fixtures that use less energy.  Through the Minority Business Enterprise Participation Plan, 27% of the project will be awarded to neighborhood business.

Austin POWER of Life (People Organizing Wealth +Organizing Resources) hosts the run every year.  Their conversation with the mayor relayed a simple message about the community; it needs businesses and an infusion of capital.

Mayor Rahm Emmanuel has run this race the last three years.  During the celebration he took the local media in attendance to task for the stream of negative images directed towards people of color. “We want the media here to know that the vision you portray of Austin is not the people that make up Austin.“

The Mayor emphasized the importance of the having a vested interest in Austin via The Neighborhood Opportunity Plan and Retail Thrive Zone.  “You cannot be what you cannot see, and that’s the reason we want to make a commitment to Austin. When every child looks at the city they should see it’s power, energy, optimism and sees it as his/her home. But if they see this city as a separate city and don’t see their future, we can never be what we need to be.”

This event was about much more that running a race for the notion of good health,  it’s about empowerment , vision and Austin not being represented by violence.

The stories the media chooses to tell are not the stories taught around the kitchen table at night. We know this all to well and the time to change that narrative is long overdue. Making sure that the rest of the city knows what we know in our heart should be a priority.
–Nkosi


Other Notes:
-The 5K started on Chicago Ave  & Mayfield, headed south down to Race, east over to Menard then back down Chicago Ave to Cicero Ave.
-The opening ceremony included Miss. Junior Pre Teen Illinois, Demira Scott singing the national anthem.
-Winning time for the 3.1 mile race was 20 mins, 14 secs.
-The $29M Minority Business Enterprise Participation Plan for the next phase of  Chicago’s Smart Light Project includes a commitment to half of their employees being ex-offenders.
– When Power of Life engaged Mayor Emanuel about empowerment opportunities to the Austin community, he response was that he has a vested interest in every Chicago community and that you are knocking on an open door.

For more scenes from a glorious Fall afternoon. Be sure to checkout our FB page. While you’re there, be sure sure to click that Like button.