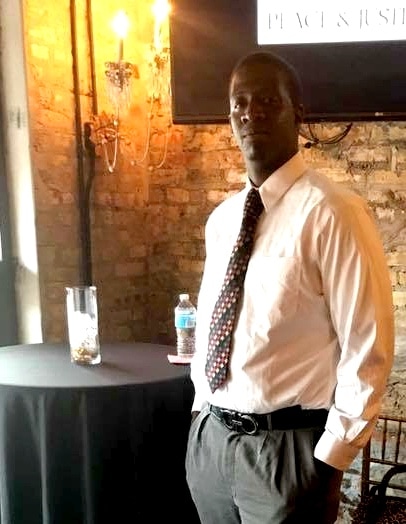 Westside Health Authority Founder, Jacqueline Reed is a powerful presence in the Austin area.  The organization she built equips local residents with a community infrastructure that touches, healthcare, technology, law enforcement intervention, youth empowerment and everything in between.

During this feelgood Friday night gathering she shared a story of her daughter recently meeting with Facebook’s Mark Zuckerberg about violence on social media.  Brown Sugar Bakery wants their third city location to exist in this neighborhood in part because it aligns her business with Mrs. Reed and her family’s legacy. The Forest Park Historical Society was in attendance as well as a newly relocated priest starting a fellowship in Oak Park…but more importantly a packed house of Austinites made it out to the speakeasy level of the Bitoy Bistro for a fundraiser to restore a statue for the most important American citizen of all time.

The Martin Luther King Chieftain Statue was created after the riots following his death in 1968.  This international symbol of peace needed a new caretaker and WHA gladly accepted the honor.  Chieftain, a 300 pound, six foot structure sits near Chicago Ave + Mandela Road; a stretch of Cicero Avenue that runs through Austin named for revolutionary, philanthropist and South African President Nelson Mandela.

The symbolism of King and Mandela welcoming you to Chicago’s largest neighborhood creates a celebration of dignity and respect to our heroes.  This is an important choice that reflects hope over fear. Having thoughts of a loving, supportive community as you cross into the village is an outstanding gesture for any area.

Westside Health Authority CEO, Morris Reed gave a passionate speech about the organization’s vision for development in the Thrive Zone on Chicago Ave that touched on a theme of community over competition.  Board Members have pledged 30K to date and are looking to double that amount to complete statue restoration.

Community Organizing Director, Charles Perry is a key contributor to Project Safe Neighborhood. This initiative will be featured on the CBS network via 60 Minutes this summer.

Bitroy’s became an impromptu listening party when Motivator George Salter blessed us all through chorus with a performance inspired by a stroll one day in Austin Village. The walk started at the MLK statue then down to the next corner where Be Strong and Courageous intersect. George then passes the corner of Don’t Be Afraid + Don’t Be Dismayed. Further down that street was a circle where God stood to remind us that he is with us all the walk of the way.

West Side Health Authority’s slogan is Every Block a Village.  There is an undeniable combination of spirituality and grace in their approach that stirs the soul.

In an area where it may be difficult for some of us to become what we cannot see, they are creating a clear direction that public image is an intrinsic element of the Austin Village revival.