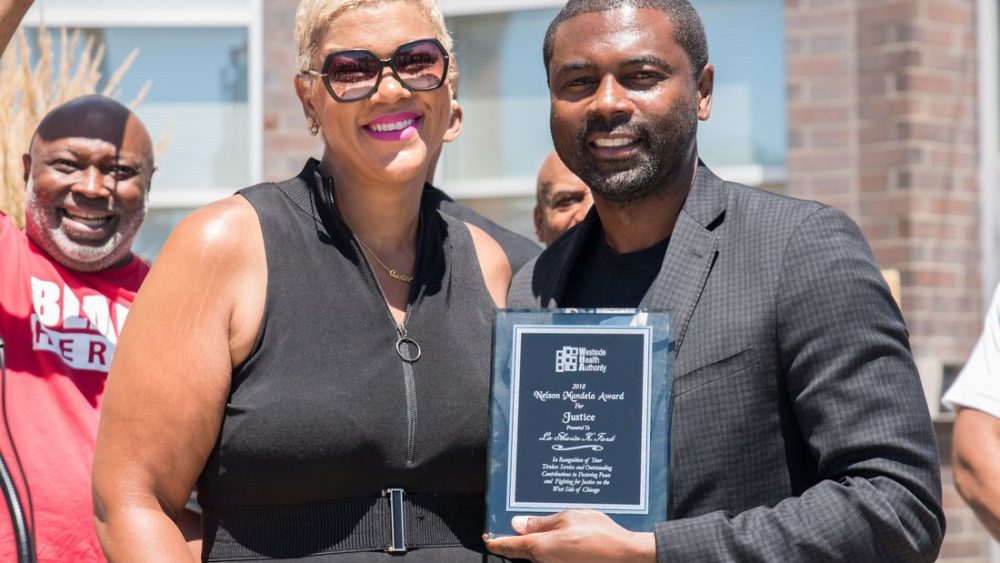 Gone Again, the West Side’s first black owned travel agency was in attendance.  Soon they will take a group of Chicagoans to Kenya for 9 days.

The HHW Vocal Arts Ensemble arrived with no less that 50 performers draped in gorgeous robes to perform South African classical hymns. After the press conference at Freedom Plaza, a procession of residents, elected officials and children gathered for a three-block stroll to the party of the summer at WHA’s patio oasis.

This is the side of Austin that the media wont show you. We always hear about the negativity…but never about the love.

No one brings out every corner of the community quite like AV72. Today’s celebration was for a man who was more than just a president. The 5th Annual Chicago Ave. Street Dedication for Nelson Mandela was the largest to date.

Described as bold, resilient, and perseverant. Speakers shared stories of meeting President Mandela during a U.S. visit as the state of Mississippi rallied to get the first black members of congress elected.

LaShawn’s acceptance speech included sharing a very personal story about his nephew’s fight with the criminal justice system.   The vigorous keynote address led to a larger discussion about trading in hope for expectation.

The State Representative’s nephew was held for a miserable 17 months, only for a judge to hear his case and have prosecutors throw it out.  The young man was never charged with a crime.  “Don’t complain about men on the west side not taking care of their kids until we acknowledge that there’s a system in place to lock them up.”  Not just siting back, but getting involved in the fight is mission critical.

At the end of the day confronting a lack of quality schools, safer streets and an unjust criminal system are your civic duty.

Lashawn K. Ford’s initiative for renaming Cicero Ave to Mandela Road received pushback from it inception. The desire to not give up was rooted in his belief that future generations should understand the significance of who the South African leader was.  Today he announced a bill to expand the renaming to include all 44.5 miles of Cicero Avenue. Currently the Mandela Road tribute runs from Grand Ave to Division St.

A full day of events followed the award ceremony. Our job is to celebrate when entrepreneurs go out of their way to bring businesses to our neighborhood.

The best part about these events is creating a space where history, entrepreneurial spirit, visual and performing arts are all equally on full display in a passionate that our children can appreciate.

Other Notes:
-Peace In Austin celebrated what would have been Nelson Mandela’s 100th birthday


For more scenes from the 5th annual Chicago Avenue Street Dedication be sure to checkout our FB page. Don’t forget to Like!