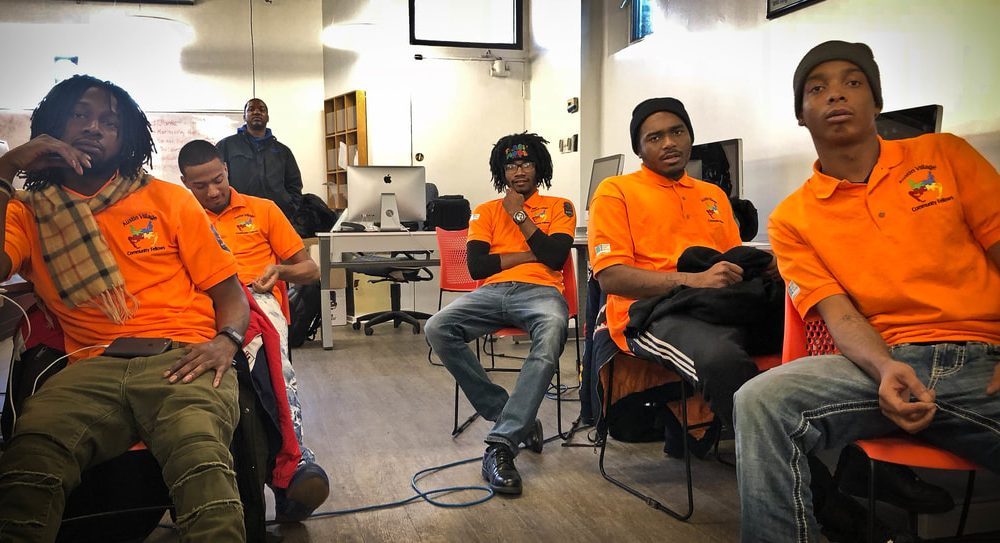 In Austin there are 34,000 youth between ages 13-25. That age group has the highest amount of disposable income in the neighborhood. Young Entrepreneurs of Tomorrow is a collection of seven young black men (and one woman) who are launching a Mobile Retail Cooperative in Austin, Chicago.

The idea was born out of a need for innovative economic development that brings entrepreneurs from home-based and storefront businesses into a mobile cart incubator for vendors. Young Neighbors Entrepreneur Program is 12-week subversive journey underwritten by McArthur Foundation and Westside Health Authority.

Saturday December 29th at 10a is the launch event. The retail platform will begin as series of popup shop events. Those gatherings will be used to recruit and curate brands to be featured during the popups between January and February.
“This is an asset to the community. At it’s core this is a movement where we expand our reach and bring people together by creating something that they can be involved with.” – Michael Clark, Y.E.T.

For young adults who feel like they can’t work for someone else, the chance to build a team and an infrastructure around a business was something that couldn’t be passed up.

It’s the opportunity of a lifetime.

Y.E.T’s personal social media footprint reaches 13,000 youth. They are already a resource that connects with the 13-25 year olds. The product and employees are community based. It’s a chance to educate neighbors not only about the product, but also about what a co-op is.

High traffic areas near Lake Street, Chicago Ave and North Ave have been selected for events. Intersections where where high schools and grammar schools are located are also ideal for the project. Spaces where students are potentially spending their allowances on personal accessories.

Terrand is the CEO of 37 Oaks, a retail consulting firm that specializes in creating scalable, sustainable businesses on the city’s West and South Sides.

Demetrius is lead program manger for the Young Neighbors. Aside from being a pastor for 14 years he is responsible for recruiting this group and was the key in all cohorts completing the mission together. His approach is non traditional. An advisor an teacher with a critical understanding around the importance of civic and community engagement.
“We’re establishing entrepreneurs from a group of young men who gave very personal reasons on why they wanted to help their community. We needed to give them a platform to do that. It’s an opportunity to increase their capacity as difference makers. “

When you see this group of young black men, an entrepreneurial collective might not be the first thing you necessarily think of. These business owners embrace the opportunity and understand the serious need for economic independence.
We need to improve our social economy. Some of us drive out of our neighborhood and even out of the city, subsequently spending our money out there as well.
A service and retail co-op with accommodating mobile carts can benefit small businesses by expanded the reach of their products. Examples of the impact have been felt close to home. Business like Schweets Cheesecake and 40 Acres Fresh Market operated out of Boombox Austin. Repurposed train cars served as a temporary home for those businesses to thrive. Schweets ultimately opened its doors in a permanent storefront at 5051 W. Chicago Ave, in part because of new visibility the popups provided.

The intent of the platform is to address the need for businesses in retail deserts. Spaces where there are food options but no other concentration retail presence.

Core textbook business fundamentals, of scheduling, financials, inventory management were emphasized. Guiding principles for this venture include that participating vendors have to contribute back to the local economy beyond just product sales.

We all have skills and ideas, we can monetize the talent’s that God gave us for a reason… and it’s a sin to just sleep on those abilities.” -Quartez Singleton

The Youth Fellows have created a family, not just a business focused on profits. This is a socially conscious effort where everything ties back into the development of the community.

Y.E.T’s final business model is about operating mobile carts not much different from the kiosks that you would find at Taste of Chicago or around Soldier Field. You can experience the brand and understand the journey at their launch party on Saturday December 29th from 10a-12p

Other Notes:
– The point of difference is not just selling products, or the need to give back. It’s that the project represents Generation Z. Y.E.T.’s value is that their ability to reach shoppers in markets that other business don’t have access to.